I have an ICT, it’s awesome.

I have an ICT, it’s awesome.

Works for me too 🙂

Yes, I’m thinking that buying a complete bike is probably the way to go. It sounds like it could be tricky getting all the correct parts together if you don’t know what you’re doing, and I imagine buying individual components for the wheels could be expensive.

Be aware that the older, blue ICT comes with 100mm rims and 4.8 tyres, while the old ops has 80mm rims and 3.8 tyres. I’m not sure if there’s many of either left and the new yellow one prob. Won’t be showing up any time soon (I think that has 4.8 tyres on 80mm rims). Whichever one you go with, it will be awesome.

yes, its weird that a bike designed around 100mm rims and 4.8 tyres now you cannot buy with 100mm rims ! 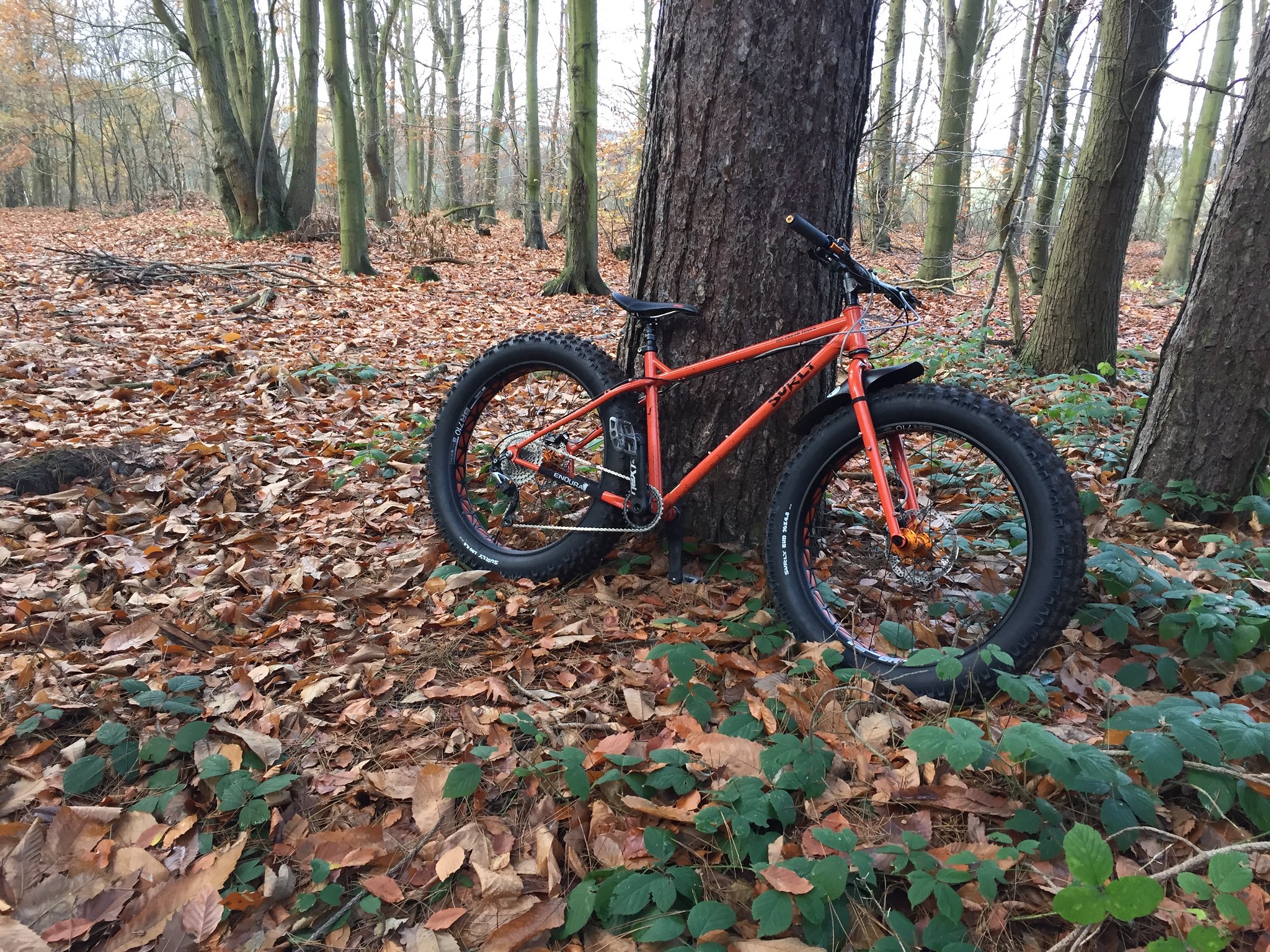 Denis99 – Member
Agree with much of the above , but I will be experimenting with a 4.8 tyre up front and changing back to the Lauf Carbonara fork for the winter.

Hoping to see if the bigger tyre and Lauf give good squish performance compared to the Bluto.

roverpig – Member
Jumbo Jims in the summer, Bud and Lou in the winter (both 4.8); job done.

Agreed with both of the above points, 4.8″ especially if you ride on beaches from time to time.

Here’s mine early this morning after a beach bivi out 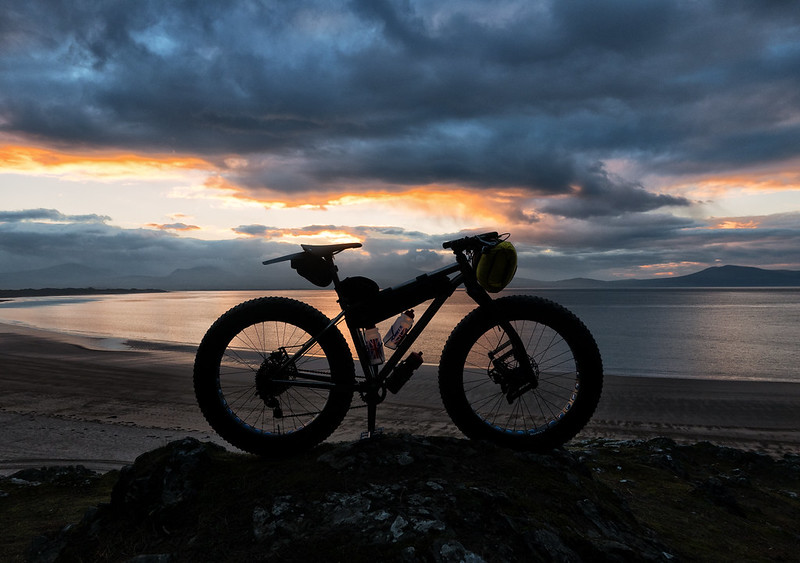 I do find those big tyres are just as much fun on peat bogs and loose rock too though.

Yes, that will probably be the first thing I try next spring, although there is a lot of winter to enjoy first.

Loving the orange ICT by the way @st4nley

If you’re just riding the same trails you would on any other mtb, then 3.8 will suffice.

TBH I’d go totally the other way round. For some stuff 3.8 nates and the like are awesome and a lot of it is stuff you wouldn’t want to ride on a normalbike. And size can become a downside for mudplugging. But for trailbike use, riding fast on rough stuff you either need volume or pressure to avoid flats, and higher pressure pretty much defeats the point of a fatbike.

Fatbike choices are all made complicated by the fact people want them to do different things. At the end of the day, for a lot of us if the question is “what’s best” then the answer isn’t 4.8 or 4 or 3.8, its 2.3. But the reason I have a fatbike is because it’s not best.

Sand & snow bigger is best including rims, dicking about in the woods nothing bigger than 4″ & 80mm rim

I think Northwind has nailed it. Low pressures are what makes fat bikes fun (for me at least). Once I get higher than around 8psi most of the fun disappears. It’s rocky up here and I like to (at least try to) go fast. Or maybe I’m just clumsy. Either way, pinch flats are an issue and my worry with 3.8s is that I’d need to go higher than 8psi to save my rims.

Either way, pinch flats are an issue and my worry with 3.8s is that I’d need to go higher than 8psi to save my rims.

Oh yes, I’ve been tubeless since day one on the fat bike. Can’t see any reason not to be. But I’m still capable of pinch flaring a tyre or killing a rim. Usually with my clumsy attempts to get over water bars without slowing down. Better technique is the real answer, but until that happens I’ll keep the extra margin for error.

Fat is fun, fatter is funnerer, so why would I opt for less fun? That’s my logic anyway.

To be clear though: I’ve not spent more than a short demo ride on 3.8s. Maybe they’d be fine, but I jumped straight to 4.8, loved it and am reluctant to go for anything less now.

I don’t really get the “you don’t need more than X unless you are doing Y” argument though. I’m riding round in circles to get muddy, what has need got to do with anything 😀

The only thing is, in the last paragraph Sanny mentions carrying the bike on ‘hike-a-bike’ sections, after giving the impression the bike can be pedaled over anything!

Don’t know about Sanny but for me it’s often legs or lungs that give up before the bike does!!

It’s a big help but it doesn’t protect your rims. (and if you’re using tubeless to get pressures lower, then you’re going to be banging rims) And fatbike rims tend to be expensiv-. I don’t mind dinging my £25 Frequencies on the thin bike that much but with my BR710s, **** that.

TBH I reckon that the main reason you get such different opinions on this stuff, is that more than most bikes these days, people use their fatbikes for such different things. Like, mine can be seen as a rigid XC bike and that’s broadly what they were, traditionally- just with some extra tricks and capabilities.

But I love riding it on the tweed valley’s #enduro and dh trails, which even now most folks don’t consider fatbike territory- but it is and it’s fantastic. So it’s no wonder what the fat xcist or beachrider or iditarod racer thinks is ideal, isn’t the same as what I think’s ideal. Neither side is wrong of course but I think both are quite bad at understanding the other perspective.

Maybe a useful thing to do is just think “what sort of bike would I buy to do this, if it wasn’t a fatbike”. For some people, there’s no alternative. For some it’d be an Adventure Bike, for some it’d be an allrounder XC bike, for me it’d be something like an Orange Alpine 😆 That helps understand that we all want something different even from the exact same bike but also reminds why the bikes we have are so versatile.

I remember getting what sounded like sound advice, “it’s very hard to flat on a fatbike, so go with skinny tubes and low pressures, it’ll be find”. And then got 2 or 3 punctures in every ride. It wasn’s bad advice, it was just situational- the very experienced fatbike rider who said it, just assumed my fatbiking was the same as his, ie simple trails and beaches.

https://flic.kr/p/PbdmcW
The whole fat bike thing is about having FUN!! Forget your Strava trophy that you got from ebay for being the quickest person up the road outside your house and the whole ‘i must goes as fast as possible’ mantra and go out there and ride the blummin’ thing just for the hell of it!
Bimble across landscapes previously unrideable on other bikes,soak up the great outdoors and then when you get home go onto the uk fat bike forum and enjoy probably the most chilled out and helpful forum on the net!
Haven’t touched any of my other bikes since i got into the fat scene at the start of this year.

I have a Singular Puffin that I’ve owned for 3(?) years now.

I started off with a Nate front and back on 65mm rims. I’m unlikely to go off riding beaches etc so went for the narrower rim.

When the first winter came I swapped my Nate out front for a Bud as whilst much larger it rolls much better than the Nate.

I’d say for General riding 4″ tyres on 65mm rims works, well it does for me. I’m 95ish kg and even with single digit pressures my rims have been fine.

I would say it’s quicker than my Puffin but almost as grippy and comfortable with the benefit of retaining a lot of “std” standards.

If I were to do the whole thing over again would I go fat …… probably but, again for me, 650b+ is more versitile.

I dabbled with b+ but just figured it’s flat out not as good as a 29er for my riding, and not as entertainingly different as a fatbike. I kind of expected to like it tbh but I don’t think there was a single moment when I wouldn’t rather have had my 29er wheels in. I can see more appeal in a hardtail mind.

If you have B+ and are considering full fat too then I’d certainly recommend going 4.8 – 5″.

Is an original Pugsley worth a punt, or are the double-walled Large Marge rims and Endomorph tyres a bit too heavy and old hat?

The topic ‘Fat bike – how fat?’ is closed to new replies.