Tubeless tyre inserts claim to offer additional protection for your mountain bike rim, so you can run lower tyre pressures for improved traction. The Vittoria Air-Liner is one of the newest on the market, so we got our local rim-dinger, David Hayward, to put them through the grinder as part of a tubeless insert group test. Over to David!

Originally I planned to ride into the office, strap these to my pack, then ride home. Then I saw them up close. They’re very big. I got Chipps to run them home in his car instead.

If something goes wrong in the middle of nowhere, requiring a tube and tyre boot, you’ll not be stuffing Vittoria’s Air-Liner into your pack unless you have a comedically massive one. Removing it on the trail isn’t really the idea though; with an 80kg rider, Vittoria rate this insert for a two thousand hour service life, or one hour used as a run-flat. That’ll get you home on a slashed tyre, or at least somewhere. For racers, that could also mean the difference between finishing or not.

Lack of stashability applies to most rim protectors I’ve been testing, but the Air-Liner in particular is a handful. The easiest way I’ve found to store it is to first make it wheel shaped, then store it in the same place I store wheels.

So, four Air Liners arrived at my place, arranged as a bouquet of unmarked green noodles in two different widths. No labels, no special valves, not even any data or branding stamped into them. It seemed to be an early version without retail packaging. As a result, it took a bit of working out which sizes were for which tyres. Vittoria currently offers four sizes to suit various tyre widths:

To suit the 2.4in tyres I typically use on my test bike, I’ve been using a Medium size Air-Liner. Wil has also been testing one in his back tyre during a two month trip around Europe, and he went for the Large insert for use with a 29×2.6in tyre.

Vittoria claims that a single Air-Liner insert will weigh between 160g-220g, depending on the size and the diameter you trim it to. However, the Large size insert came in at 247g (27.5in) and 292g (29in), which put these at the heavier end of the scale.

Tyre inserts are one of those things that’s new enough, and have a few tricks to fitting, that most companies making them have put out a video showing how. Vittoria are no exception, and have a good tutorial.

First is sizing it, which is pretty simple: the Air Liner comes long enough to do a 29in wheel with length to spare. Size it on your rim, mark where you need to cut, and slice it with an extending craft knife. Punch two holes with a screwdriver, then zip tie it together. Pop one side of the tyre on, mist the Air-Liner with water to lube it, then stuff it in the tyre. When getting the second bead in, use a tyre lever to stuff it down into the rim well, giving you enough slack to finish getting the tyre all the way on. Add sealant, inflate, and boom. Well, hopefully not ‘BOOM!’, but you know what I mean.

I tried the Air-Liner out with several different tyres, and all worked fine with it except one. A Panaracer Pandura tyre I’m testing at the moment has a kind of hex grid texture on the inside of the tyre casing, which made it impossible to tuck the bead far enough under the Air-Liner to get it to seat (the Panaracer Pandura also didn’t play nice with CushCore, which has a similar installation procedure). The tyre texture would grab the insert and pull it in with the tyre, then the insert would spring back, pulling the bead back out to where it started. I gave up on that tyre, but various Maxxis, Onza and Vee tyres all had smooth inner walls that worked just fine.

Unlike some inserts, the Air-Liner has just one hole to allow sealant to flow through. I thought this might be a problem, but it turned out not to be. I guess that’s because movement of the wheel constantly forces sealant outward toward the tyre tread, even if it can only drain from the rim side of the insert through that single hole and the join.

The Air-Liner takes up a large amount of tyre volume. Especially at the low pressures it enables, it doesn’t so much have a gentle spring curve, rather a more a distinct two stage ramp. Though pressure in the tyre squashes the Air-Liner down to a smaller size than you see before fitting, there’s still not much travel in the tyre before it starts to make contact with the foam. That boundary is noticeable, and you’ll feel it more often than with a lower volume system such as ProCore.

It’s not necessarily a bad thing, but it can take a little getting used to. It doesn’t compromise handling. The foam isn’t rigid and, with a low tyre pressure, still does a good job of tuning out trail buzz. Running 2.4in tyres at 15PSI gave a tremendous amount of grip, but with enough support to stop them squirming around in corners or bouncing rhythmically on climbs.

Over six weeks, Wil found his Air-Liner loosened a bit and started to rattle around inside the tyre, so he removed it and trimmed a little slice off before reinserting. Mine may have got a bit baggier during the test, but not so much I noticed any noise.

The amount of protection this gives your rim is extreme, putting more material above your rim than any other insert we have on test. Neither me or Wil dinged a rim at all while running Air-Liners, and I didn’t hear any rim impacts either. That’s certainly not for lack of trying, especially given I destroyed a wheel and gave several others flat spots while running the other inserts in this grouptest.

Here’s a video of Wil demonstrating what you can do with the Air-Liner inside a tyre;

That poor rear tyre! Didn’t realise how much I’d been pummelling it until I watched this slo-mo clip I shot while filming the Scott Ransom review. There’s a reason I haven’t destroyed that rim yet though…

Right now everyone seems to be asking for comparisons between this and CushCore. I’d say the Air-Liner is a little easier to fit, but not by much if you make the Air Liner tight enough to stop it rattling. The other major difference between the two is the air volume left over. As mentioned, the Air-Liner fills much more of the tyre than CushCore, giving you a bit less room for tuning that tyre spring curve.

After four months of riding, including a week in the Alps, I whipped the Air-Liner out of my back tyre. It still looked new. No other tyre insert I’ve tested has managed that. The Air-Liner that I stored in a cupboard has more marks on it than the one I used. The one I rode has no nicks, no ragged holes, no telltale snakebites.

At first I thought it had drunk up a load of sealant, but turning it realised the culprit was one of the biggest Stan’s glob monsters I’d ever seen, and that had germinated on a tubeless repair anchovy in the tread, rather than any part of the Air Liner. There was a little bit of accretion around the joint and the zip tie, but only a small amount.

Taking it out for examination, the surface was still smooth, with no claggy bits of sealant hanging off it and, impressively, no bite marks from wheel impacts. That wasn’t for lack of trying, the Air Liner just puts so much meat between rubber and rim, they don’t ever seem to get near each other.

Of all the inserts in this test, the Vittoria Air-Liner gives maximum fit-and-forget protection. It is weighty, and the hefty size means that the air volume inside the tyre is quite drastically reduced. That makes a noticeable difference to the way your tyre ramps up, but the result is a load more support and rim protection, even while running silly-low pressures. 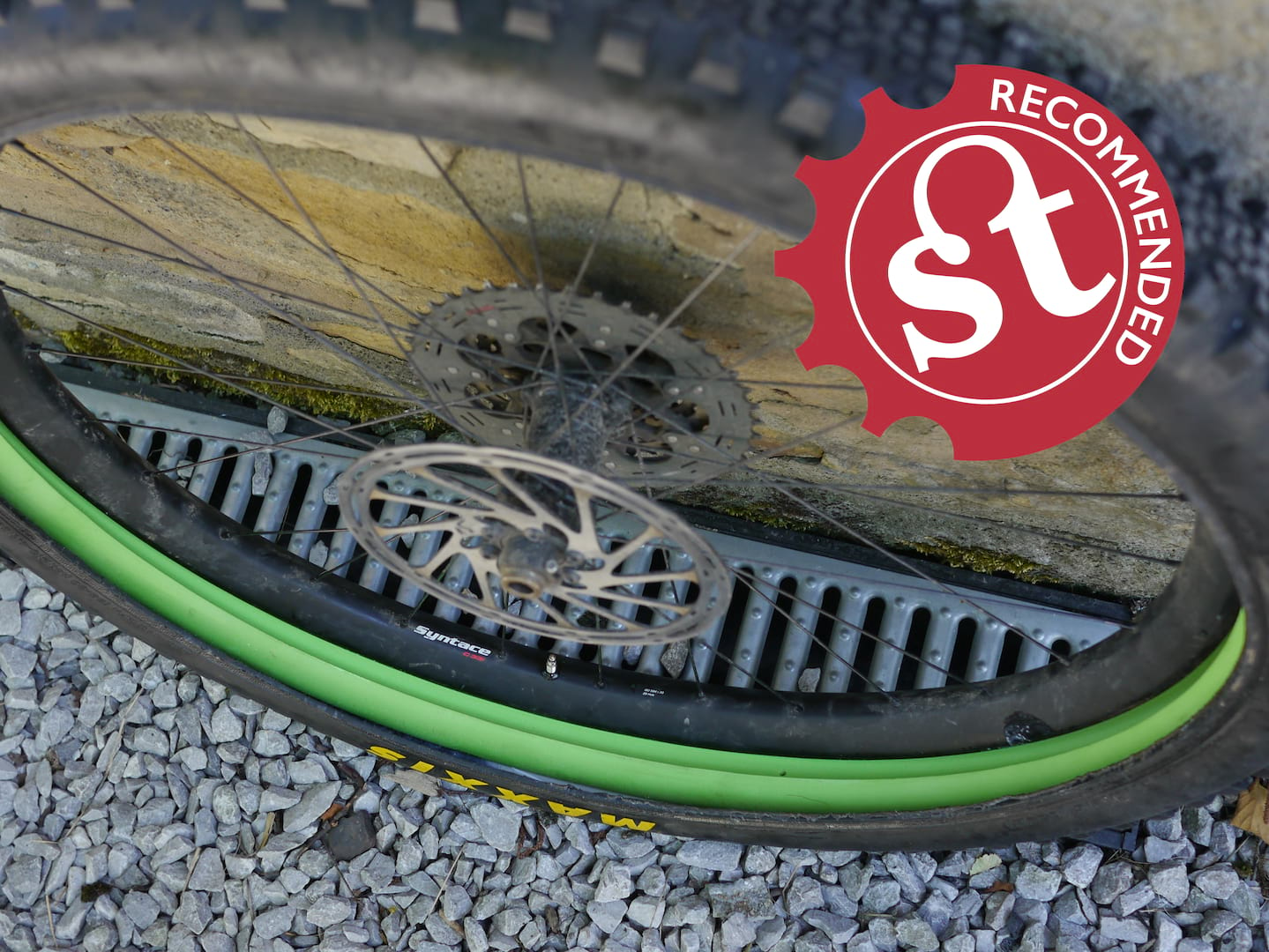