Fort William 2018: Qualification Results Are In!

by Wil Barrett 2 years ago 0

It’s the end of Day 3 at the 2018 Fort William World Cup, and both the Elite Women’s and Elite Men’s fields have made their way down the side of Ben Nevis to post their most rapid qualifying times in preparation for tomorrow’s big race.

Despite the earlier predictions, fortunately for all concerned the epic thunderstorms and heavy rain didn’t eventuate. We got a brief shower in between the women’s and the men’s qualifying sessions, but although the dark clouds threatened with a few rolls of thunder here and there, the Nevis Range largely remained dry and warm. Swampy is probably a better way to describe the weather conditions though, with the overhanging clouds and warm conditions seeing the humidity levels hit around 80-90% throughout the day, ensuring all of our photographer bibs were well and truly drenched by the time we’d gotten down to the event finish line.

Most of the racers would have appreciated some precipitation though, as the rough Fort William race course is looking very dry, dusty and blown-out in between all the rocks. We spotted a few crashes and mechanicals throughout the afternoon, with a lot of riders struggling for traction on the baked-out track surface.

We’ll have a more comprehensive photo gallery from the day coming up later this evening, but for now we give you the results for both the Elite Women’s and Elite Men’s qualification rounds.

In the Women’s qualies, it was a familiar few names in the top five, with Rachel Atherton putting just two seconds into Myriam Nicole’s time, with Tahnee Seagrave and Tracey Hannah following behind in 3rd and 4th. Perhaps the most surprising performer was current Enduro World Series leader, Cecile Ravanel, who this year has decided to turn her capable hands to downhill racing, kicking off with the first round in Losinj, Croatia. Ravanel is back for Round Two at Fort William, and based on her time and form on the bike, it looks like her decision is likely to pay off – watch out for her on the race track tomorrow! 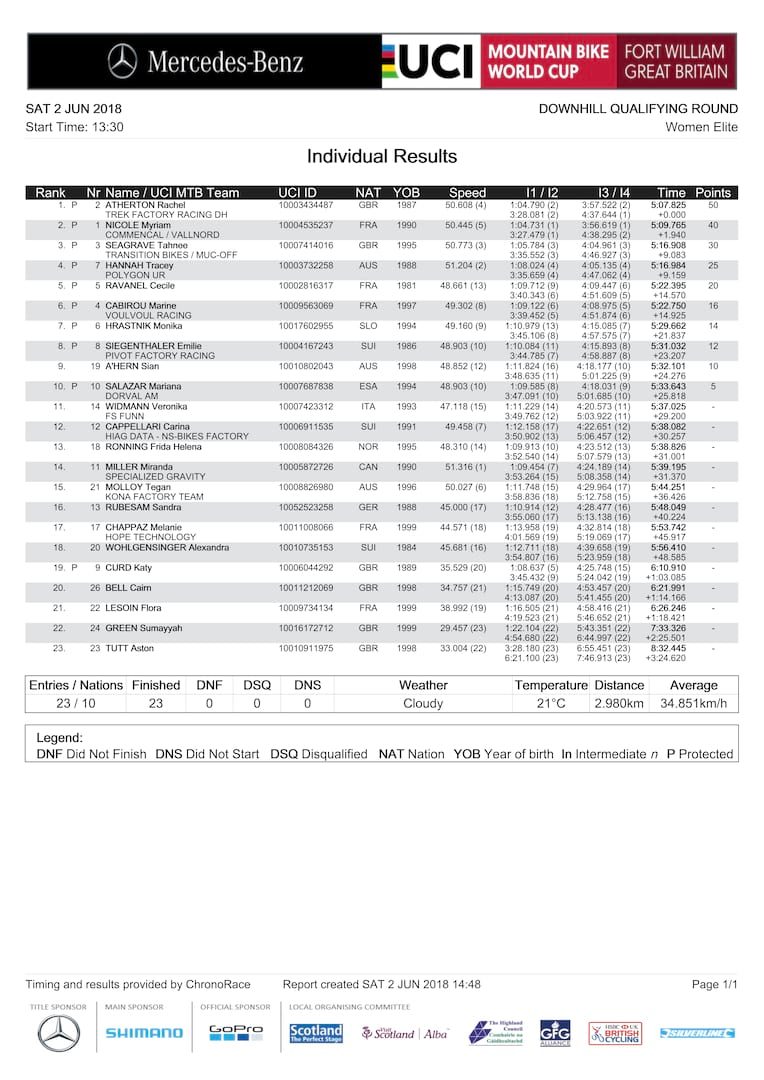 In the Men’s qualies, the top-five fastest times were delivered by some of the fresher-faced riders on the race circuit, including Luca Shaw, who posted the quickest time of the day, pipping Danny Hart by less than one tenth of a second. Loris Vergier followed, with Troy Brosnan and Greg Williamson rounding out the top-five.

As we sit here in the Media Centre just alongside the finish line chute at Fort William, the rain has just started to fall. In the bucketload. A small amount of rain would actually be ideal for the dusty race course, but if we get a whole lot, that could change a things. And there’s more rain forecast tomorrow for the early-to-mid afternoon.

Riders will surely be aware of the current forecast, so there’s a chance some of them played a strategic move today to post a slower time so that they’d have an earlier start time tomorrow. If that gamble pays off, then fingers crossed, they’ll hopefully beat the rain – in theory.

Then again, nobody can seem to predict the weather accurately here in Fort William, so as to what happens next is anybody’s guess!