by Wil Barrett 2 years ago 0

And we mean ‘nasty’ in the good kind of way.

Orange first showed a prototype 29er downhill bike at Eurobike last year, which was originally labelled up as the ‘Strange DH29’. The Halifax-based bicycle manufacturer has been refining its big wheel concept since then, with tubing, geometry and the rear suspension design all receiving tweaks to get the performance dialled in just-so. Orange is still keeping quiet on any expected dates of arrival for the bike that is now known as the 329, but given how good this one here is looking, we don’t expect it to be that far away. 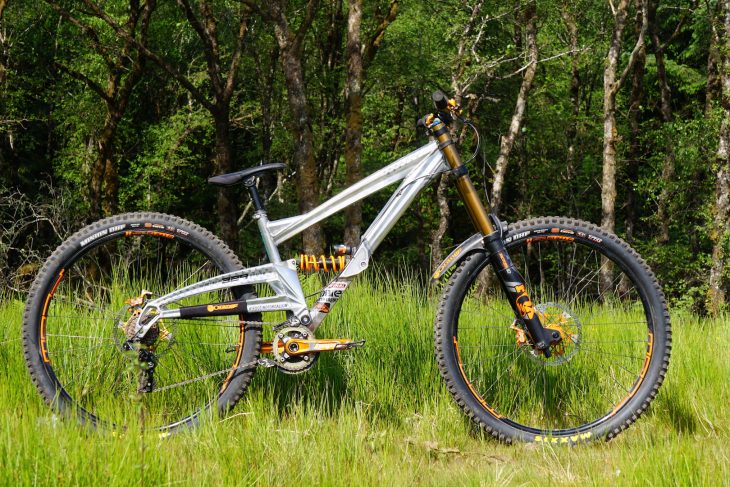 The owner of this X-Large 329 prototype is a chap called Vaughan Evans, who brought his lovely bike to Fort William to display on the Orange stand. His frame has a custom raw polished finish, and there are lovely details abound including a slew of titanium bolts, a titanium rear axle, and a titanium main pivot. Oh, and a bejewelled head tube badge. We’re also told that the shock mount is different, with Orange experimenting with different shock locations and lengths to fine-tune the progression and feel of the travel.

The frame itself is of course made from alloy, and it features Orange’s characteristic single-pivot suspension design, with a high and forward main pivot. Rear suspension travel is just on 180mm, and Vaughan has that paired to a Fox 40 fork with a full 200mm of travel.

The wheels are built with Hope Pro4 hubs and Stan’s No Tubes Flow rims, which are wrapped with 2.5in Wide Trail Maxxis Minion DHF tyres. Of note is that these tyres are the regular EXO folding-bead versions, and not the heavy duty 2-ply downhill model. The drivetrain is a bit of a combination setup, with Hope cranks, Kore flat pedals, a Renthal chainring, a Shovel carbon fibre chainguide, and a SRAM GX 7-speed rear mech and shifter. Look a little bit closer, and you’ll also spot a Hope cassette too. It isn’t a regular Hope cassette though, but rather the first seven sprockets of a Hope cassette, with the larger alloy sprockets removed. This smaller portion of the cassette is machined out of a single billet of steel.