Barney heads off to Shropshire to try to answer a question which has been bugging him – why are there so many good riders from such a quiet county? 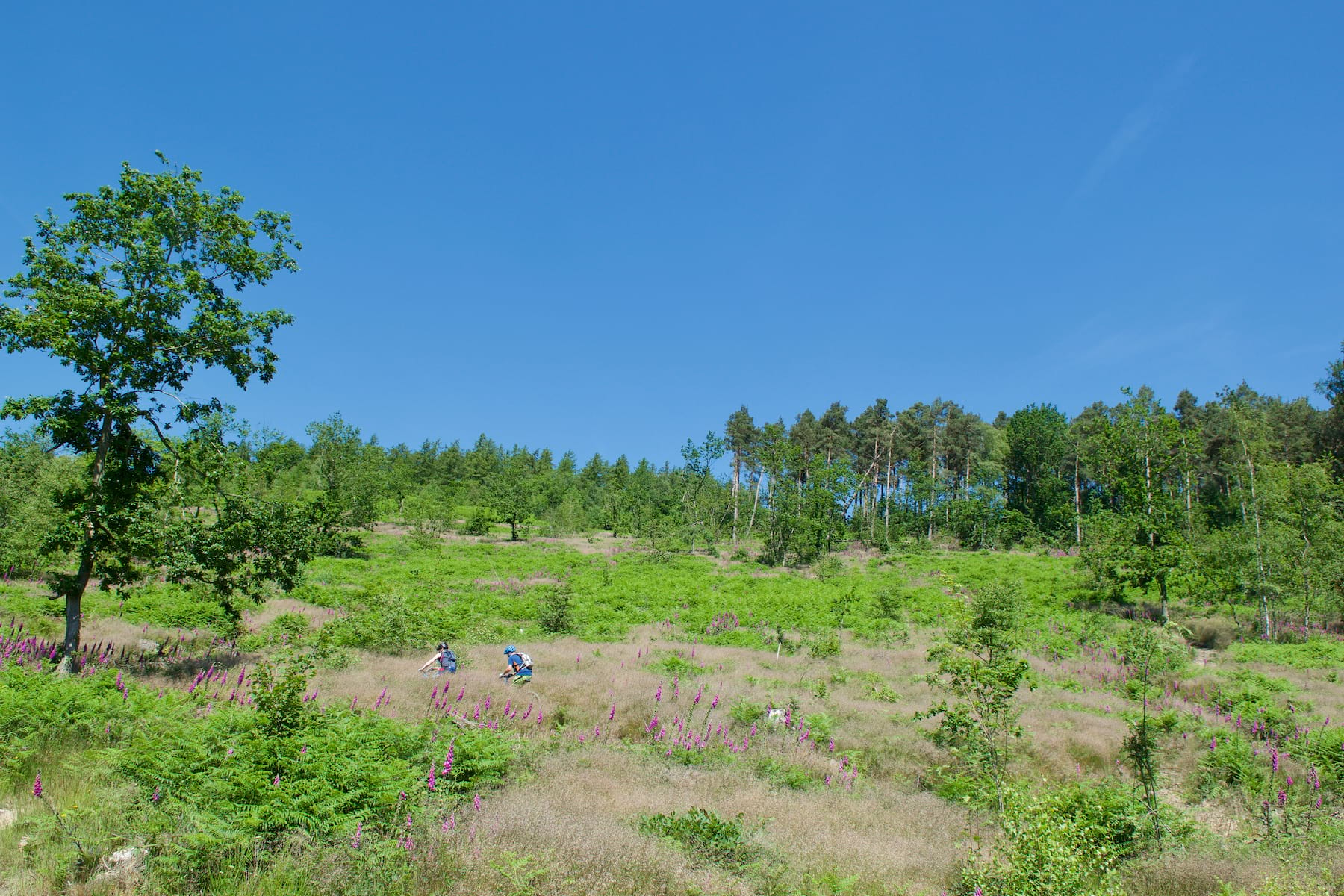 Quests are nebulous things. The definition is suitably vague – “the search for something”, but it’s fair to say that journeys are involved. An uncovering. And perhaps, if you’re very lucky, a big reveal. I’d not go so far as to require an epiphany, but something hiding in plain sight that suddenly becomes obvious? That’ll do nicely. I fancied a good quest. I fancied sallying forth to uncover some age-old secret or two. Perhaps I could amass a motley crew of latter-day knights with whom I could gallivant around the countryside, righting wrongs and rescuing people from peril? Or, perhaps it might be more accurate to replace the word ‘people’ with ‘beer’. And the word ‘peril’ with ‘fridges’.

It had long niggled me that I knew so little of Shropshire. I’d ridden the Long Mynd, sure – and a wonderful thing it is too – but I’d always skirted over the county’s other charms en route to more conspicuous trails in either North or South Wales. But gradually it dawned on me that Shropshire seemed to be rather over-blessed with good riders. Very, very good riders. People like Helen Mortimer, Marc Beaumont, Neil Donoghue, Andrew Titley, Neil Halcrow – and there are plenty more.

This seems odd, considering it’s not blessed with huge mountains or an overabundance of people – in fact, it’s one of the least populous counties in England. So what is it about Shropshire that breeds competence on a mountain bike? A need to investigate rammed its way into my brain like an overlarge pimento into a particularly dense olive. A quest! Jim Burley is an old mate, a bike mechanic’s bike mechanic, comedian, artist, musician and bon viveur. He also happens to be a consummate rider of many years standing, and a born Salopian (someone from Shropshire) who’s recently moved back to his homeland. In fact, the perfect guide. And Jim then introduced me to Simon Pearson, successful businessman, unfeasibly competent guitarist and a former downhill champion who also clearly knows a thing or two about riding a bike.

We decided that the thing to do would be to ride a few of the best-loved trails in the area, and try to work out precisely what it is that puts steam in Shropshire rider’s strides. The cross-country flavoured appeal of our first ride, Clee Hill, would’ve perhaps been better managed without the sort of decadence the previous evening provided. People in their 40s really should know better, but my inner 19-year-old shouts more loudly than the rest of me – especially after a couple (ahem) of Babychams.

Steve Chapman from Ludlow-based Islabikes has kindly offered to meet up with us to show us some of his favourite trails in and around Clee Hill. Steve is lithe and fit looking, alert of eye and bushy of beard, and he’s sporting a very fine looking singlespeed hardtail rig. Pretty much all of this is in stark contrast to the rest of us, who are feeling the effects of some profound 2am over-indulgence in booze and guitars. My enfeebled limbs won’t help, either – my personal mantra excluding as it does such words as  ‘training’. And ‘diet’. Oh dear. So Steve leads Jim, Simon and me swiftly upwards and we grind past disused quarries that would give steampunk aficionados conniptions, with disturbing golf-ball shaped radar installations glinting ominously in the distance.

Any upward misery is nicely counterpointed though by the following gravity-enhanced hurtlings. On every climb Simon and Jim manfully try to keep Gazelleboy Steve in sight while I doggedly bring up the rear, and every descent is a chance to catch my breath and stuff my lungs back down into my chest. Yes, the descending is glorious; it’s hugely exposed in places, enclosed in others, rocky trails alternating with grass and mud mean it’s somewhat demanding in technique and riding those hills back up again mean the place is pretty demanding in fitness.

But as fun as it is, there’s plenty of stuff like this elsewhere in the country. There has to be more to the birth of Salopian prodigies than challenging loops such as these. And so indeed it proves. Onward, knights! To Hopton! A Hopton, a skip and a jump.

Hopton Woods is touted by the Forestry Commission as the “home of mountain biking in Shropshire”. Intriguing. And there is loads of riding on offer – from relaxing blue trails up to tortuous blacks, from whimpering-ascent cross-country loops to arse-puckering downhill runs, all in one convenient package. And our hangovers are wearing off – result! Steve doesn’t seem to be flagging, disappointingly, and he’s still raring to go. I have consumed a lagoon of coffee, so I’m also raring to go and off to pee behind bushes every five minutes.

Hopton is a lovely ungroomed place. There’s a car park at the trailhead, and that’s pretty much it. We’re just playing here really; exploring the area, searching out interesting-looking bits and pieces, pushing back to ride stuff again for the camera, and it’s loads of fun. It’s easy to see why a place like this would help to foster local talent. There are some hugely rewarding and natural-feeling things to ride, and they’re rather techy in places, too – you want rooty drops into tight corners? Yup. Lightning fast blats through ever-tightening trees with sneaky lines to get a little airtime? No problem. It’s all here.

And again, I’m struck by how much fun I’m having. It’s taken a little time to get here from Clee Hill, sure, but there’s a superabundance of awesome in just this one relatively small area of woodland. No, there are no huge mountains, but here at least care has been taken to wring out as much as possible from each metre of trail. It’s clear that many of these trails have been around for a while. Could the existence over time of centres such as these suggest an answer to our quest? All these places to ride – it’s natural that folks would end up as pretty handy riders, isn’t it? The two places we’ve been so far, coupled with the huge edifice (literal and metaphorical) that is the Long Mynd, might suggest so, but let’s look at one more place. Let’s go to Eastridge.

(Sung to the tune of In the Blue Ridge Mountains of Virginia – tenuous I know, but what the hell. If that doesn’t set off a subtle earworm, I don’t know what will.)

[Aside – In the spirit of full disclosure, I’ll admit that I rode Eastridge on another weekend with Jim and Simon. Equally hungover, mind you. You think I’d learn.]

Jim, Simon and I now find ourselves at the car park at Eastridge, for a last foray into one of the famous places that Shropshire mountain bikers call ‘local’. Eastridge is home to yet more downhill tracks, the odd enduro race, and some fantastically entertaining ‘regular’ trails. My oh my, this stuff is good. 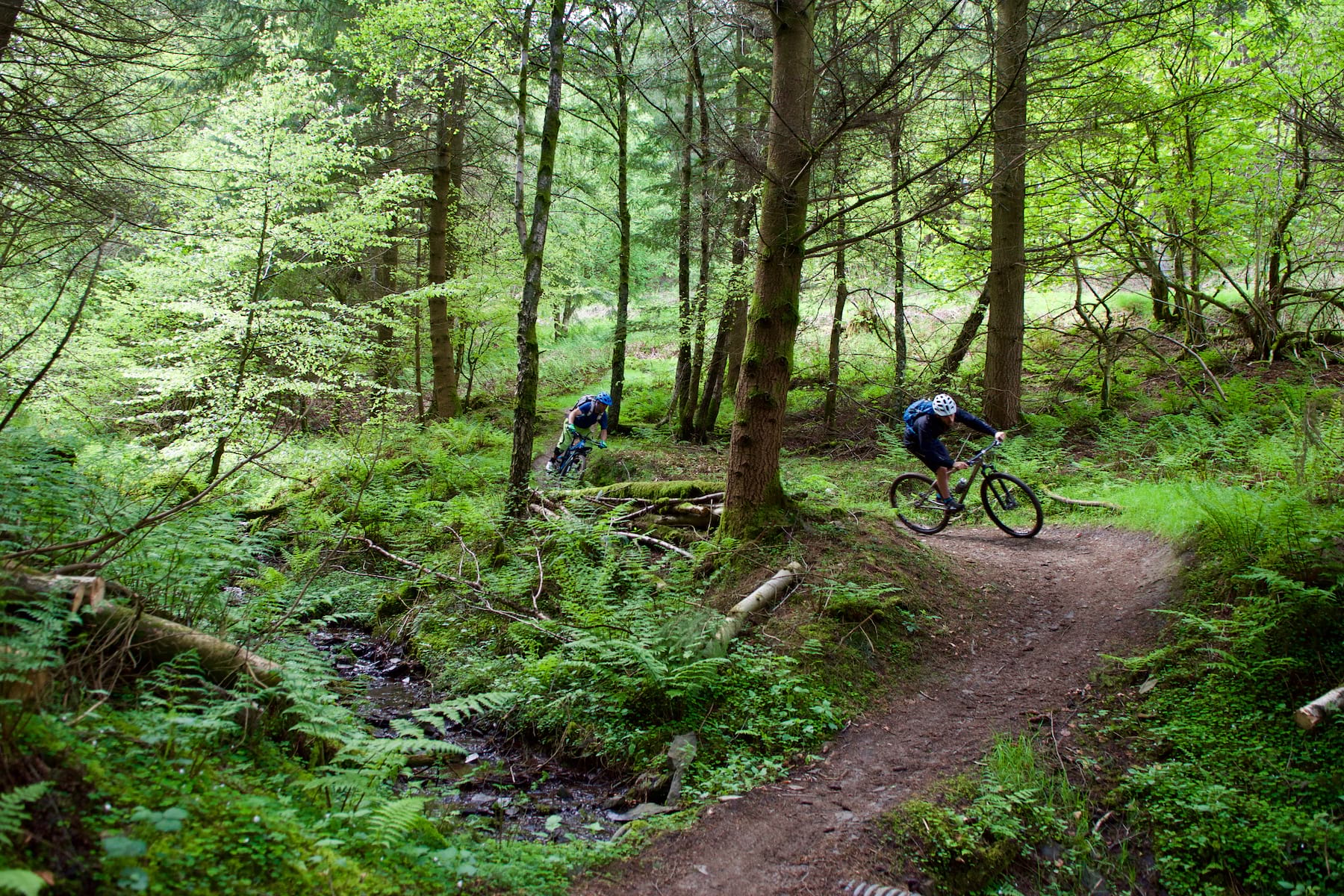 We start with a mellow enough tree-lined climb, before things get truly brutal on a long, newly exposed zigzag (called Goliath apparently) and everyone begins to melt as the thermometer on this sunniest of days creeps relentlessly towards 30°C. The descents are, as expected, wonderful. Deep trails in thick woodland; each hip and lip seemingly designed to complement your riding – I can gracefully arc from corner to corner, pushing my weight just so to line up for the next one. Descents lead to crests which scrub off just enough speed to fall perfectly into technical sections. Fantastic.

Again, the trails have the look of ribbons carved over time by riding, rather than laboriously maintained sections of trail. There’s a strong sense that you’re 14 years old, playing in woods, and it’s only over the next rise that some older kids have built some jumps you’re going to take your Grifter over. There’s an air of comfortable isolation, and the whiff of infinite summer holidays. You could just ride here forever.

I wish I could. Ignored by motorways, and one of the least populous areas in England, there is a feeling of glorious isolation to Shropshire. Of quiet, benevolent claustrophobia. Once you’re nestled within the bosom of all those rolling hills, it’s easy to feel that you’re a million miles away from anywhere else – and perhaps this is ingrained in the local populace. Simon tells me that in his youth everyone was obsessed with anything two-wheeled. The big kids would all mess about with motorbikes – an activity they’d all learned from their elders – and everyone would rush outside when they heard the braaaap of a two-stroke engine cutting through the countryside. And Jim’s dad is restoring an old grasstrack racer in his shed – two wheels and dirt seem to be part of the local psyche. It’s no wonder there are so many great places to ride: the riders appeared first and made them, which makes new and better riders. It’s a glorious spiral.

In Shropshire, mountain biking found a collective psyche perhaps more attuned to its delights than elsewhere. And with plenty of remote, hilly places to ride, it’s no wonder there are so many good riders. If you ride bikes in Shropshire, it’s almost hard not to be.