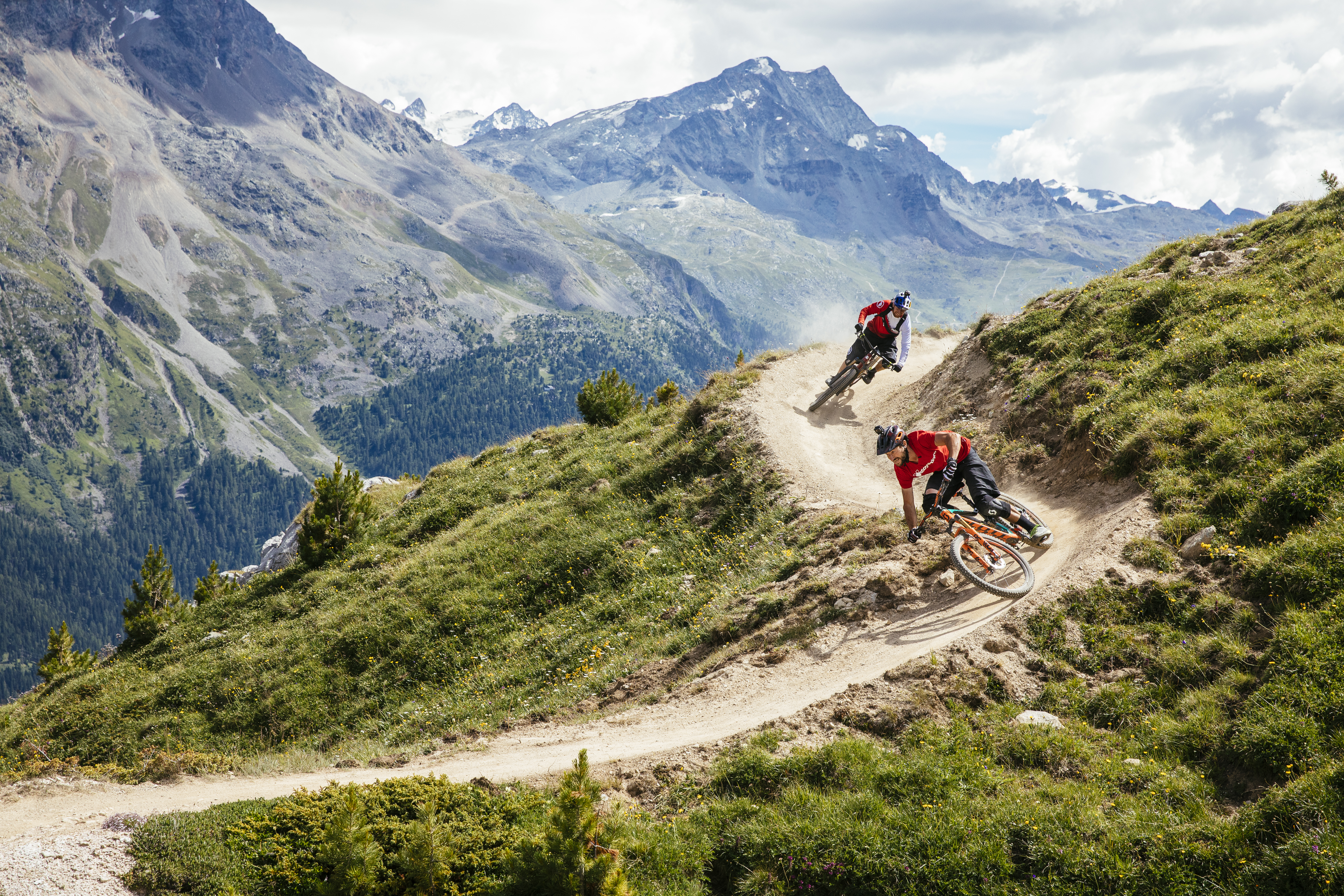 Hitting the “Home of Trails” with Local Hero Claudio Caluori

If I could, I would spend every day on my bike. Nothing beats hopping on my bike, getting out there in the fresh air and hitting the trails with my mates. Throughout my career I have been lucky to ride in a number of awesome places and made a lot of friends out there on the trails. This time last year my first video shot in Switzerland was released and I still fondly think back to those days of production with Claudio Caluori. It was a very special adventure with plenty of laughs, local delicacies, and great riding through Graubünden, Switzerland – the “Home of Trails.”

I have been watching Claudio Caluori’s famous POV runs for years now. His videos are awesome. Anyone who’s familiar with them knows that the Swiss downhill legend is eccentric, full of energy, and really passionate about bikes and his home turf Graubünden in Switzerland. Even if you can’t always understand what he’s screaming through his helmet, it’s obvious from the first second that Claudio loves steep and technical trails. You can’t help but smile at his enthusiasm for riding when you watch the fast-paced edits. When the opportunity came up to head to Graubünden in Switzerland with Claudio, I was game right away. The thought of him chasing me through his home terrain sounded amazing and I have always wondered whether he is always as loud on the trail like in his famous POV. I was bound to find out …

A rollercoaster ride up, next to, and over trails, which was to last nearly two weeks, lay before us. The first winding ride down rooty trails and loose rocks surrounded by stunning scenery led us to Alp Fops – an idyllic mountain cabin. During the location scout we had spotted the drop off the cabin’s patio to the meadow below and a table that could function as a run-up. It seemed like the perfect setup for me to try out a new trick I had been wanting to do for a while: a 270 tire tap over a road gap.

After finishing off my Bündner Plättli, a plate of local meat and cheese specialties, I was in pretty fine fettle and decided it was time to give it a go. It took a while, but you just can’t beat that feeling of landing a new trick. Then it was Claudio’s turn to take on the extremely short run-up. It cracked me up to see him jump up there – fearless but unsure – send it anyway, and case the landing. It was so funny! Us both landing the drop in one way or another was a great end to the first day. I just couldn’t wait to see what the rest of the region had to offer.

We still had roughly two weeks ahead of us in five different parts of the Graubünden biking region. We raced down a bunch of different trails together – winding flow trails, fast-paced runs through epic forests, and across a high ridge in Davos Klosters that ended with an ultra-long downhill with spectacular views. It sounds like a cliché, but it really is true when people say it is hard to keep your eyes on the trail with all the incredible scenery surrounding you. On the Mutta Sura trail above the Ruinaulta Canyon near Flims, I even got a glance of Claudio’s Maiensäss, a small alpine hut typical for Graubünden, on the other side of the valley. On the flow trail in Corviglia, we pushed each other to the absolute limit. It was like being on a never-ending magic carpet ride. Riding with Claudio was just like living in a giant POV run of his, with constant commentary and banter. Hilarious!

After having had Claudio challenge me down the trails most of the time, it was my time to shine and test Claudio’s nerves. When we reached a viaduct in the Zügen Gorge that had an 80-meter drop either side of it, I decided to put Claudio’s fear of heights to the test by riding along the wall. This freaked him and the film crew out a bit. But I wasn’t done there. Although we were mainly focused on the trails in Graubünden, we also rode through a couple of villages where I was able to put my street skills to the test. In the village of Müstair, there was a wooden roof that looked like a perfect ramp for a front flip. It really tested the limits of my body and my bike. That flip was probably one of the biggest things I have ever done in the streets on any bike, let alone on my mountain bike.

One of the amazing things about this part of the world is that mountain bikers can ride every trail possible. I wish that mountain bikers all over the world were as accepted as they are here. I really had the feeling that the locals here really do welcome us. The only thing you probably won’t find in Graubünden are signs saying, “No biking allowed”. That’s just awesome! Claudio and I were only able to see a fraction of the 7,000 square kilometers and trails just waiting to be conquered. Our wild ride started out up at the top of Piz Nair, where an ibex towered over the “Home of Trails” down below, and it ended with my front flip in tranquil Val Müstair. Between them lay two weeks of spectacular trails – a mountain biker’s dream playground. This was a trip that I certainly won’t forget anytime soon.

For more information on the trails Danny and Claudio rode head to www.homeoftrails.com