Though I kind of agree, scotroutes, a lot of kids use that trail and I hate the thought of one of them coming a cropper over them.

I did the most massive log of my life yesterday… I shit you not it was 18″ from tip to tail and as straight as an arrow..
It very nearly made a bid for freedom over the edge of the bowl and has definitely put me ahead of my other half in the ongoing longest log competition 🙂

Why would you not just hop over them?

was there any water left in the bowl, if yes then keep pushing theres more to fill, if no then skills

Been loads of this happening around the NWAlps lately, they underestimate the mtbers though as most can be ridden over, it does ruin the “flow” somewhat when on one day it’s a clear trail & the next it’s like a tree surgeon convention. I tend to move the logs as far from the trail as possible to discourage it being moved back as I expect the perpertraitors are lazy sods

Happening more and more round these parts too.

The odd big log, but more often than not a 30 metre or so stretch of multiple smaller obstacles. The newest trick is thick brambles pulled across the trail at head/chest height and twisted round a tree opposite.

Slowing us down on (occasioanlly) shared trails I kind of understand, but deliberate attempts to harm I don’t. Especially when kids & dogs use the same trails.

The usual to-ing and fro-ing of small boulders placed in the middle of an inocuous little descent on Barden Moor. Normally you can just hop them or use a different line, but someone had made a special effort today, and I wasn’t in a hurry so rolled them away to wind up whoever is doing it. 🙂

two cuts through the nearest one, leave the larger single one for interest sake.

get some bigger tyres?

I’m not so sure about a lot of these where people just jump to the conclusion they were deliberately placed there. Trees do come down, in some quite dramatic ways.

p.s. Have to admit I was expecting some big steaming log 😆

Yunki did you have to stand up to ensure it came out in one piece?

My wife sent me a photo of a turd she did last week that blocked our downstairs loo, what a darling (her, not the turd. Although it was very impressive)

I need to know about your wife’s diet. And Yunki’s.

Yunki, wilko, you guys are sick! Seriously, what is wrong with you? 😆

Some of you have strange wives.

I had an ongoing argument with a do-gooder on a cheeky footpath near me. They continually pulled logs and brush and branches over a short cut of footpath, I kept clearing it off.

In the end I left them a polite note stating that poaching a footpath on a bike is a civil matter between the trespasser and the landowner, and as the land is a small patch of scrubby common land (ie not theirs) then really it was nothing to do with them. Whereas, deliberately blocking a legal right way is a criminal offence. So, if they keep their nose out of the first bit, I’d keep my nose away from informing the police about the second bit.

[don’t know if what i said had any basis in real law, but it did the trick]

I MTB through the woods. Blow down is just that. We had several like that on the trails and larger. Top tip riding off piste, expect there to be trail obstacles and other people. If you nearly OTB then maybe other users are at risk? Slow down, enjoy.

Don’t these supposedly pro nature ramblers who do these kind of things think ~oh wait a minute bob, if we cut this tree down and put it in the way of cyclists, isn’t that going to do more harm than good for our cause~

They were definitely not there through the forces of nature.
To be fair, their presence didn’t upset me because they slowed me down, it was the thought of a local kid on a bso not being able to slow down, jump them or otherwise deal with them safely. 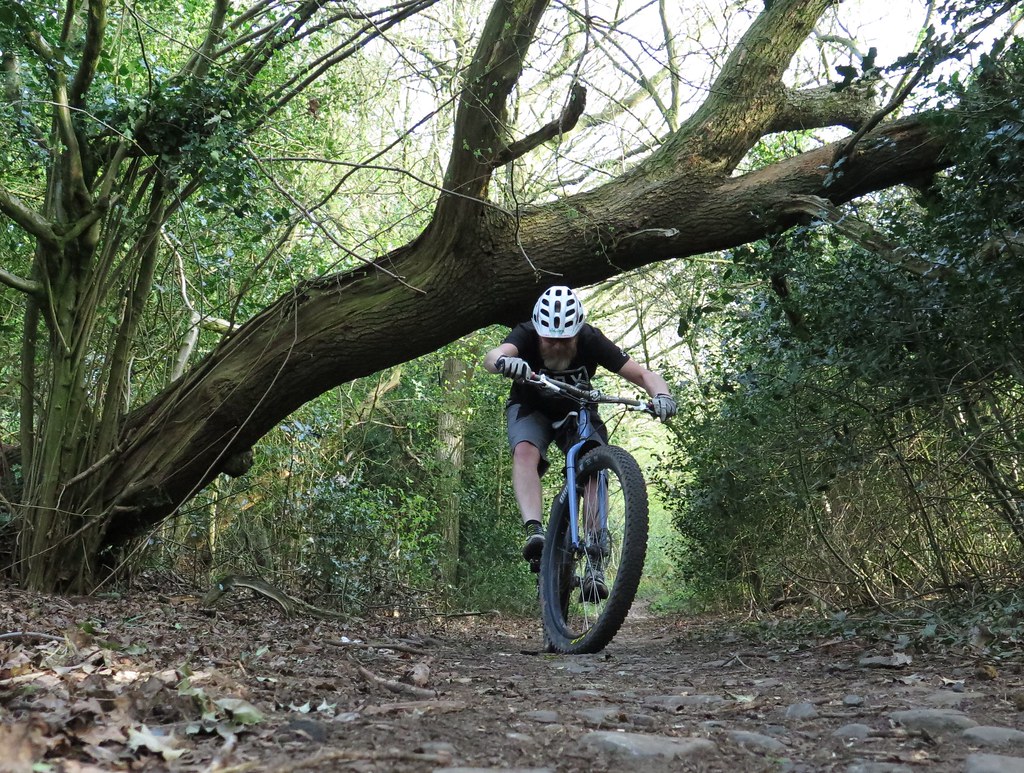