no, they think things like the devil are plotting against them, or earthquakes result from tourists disrobing on the top of a mountain, or aids is retribution from god, etc. obviously these people are much saner…

You are of course entitled to believe that over 90% of the world’s population is mad.

But I wouldn’t necessarily agree, based on the accepted definition of “sanity”.

But do you respect the parts of those religions that are misogynistic, sexist, homophobic, violent, intimidating, expansionist … , Ernie? I don’t and view organised religion as a conspiracy against the humanist secular world I’d like to live in. Feel free to enjoy your personal faith though.

That can quite easily describe plenty of secular governments as well.

No need for religion for people to be shit to each other.

I’m sorry Edukator I thought we were talking about whether people with religious views could be “sane”.

Apparently 99.8% of people living in India claim to have religious beliefs.

I’m fairly sure that 99.8% of Indians aren’t insane. But feel free to disagree. If you want.

I was responding to

(she knows that I respect other people’s religion

Which I disagree with, Ernie, but you clearly meant ” personal religious beliefs” which is very different.

People’s personal faiths and beliefs are just that, personal. It’s when they become a religion imposed on others that I lose my respect.

Most people don’t think that other humans are plotting against them.

For the most part, I don’t think people are plotting against me… though of course they have reason to, given the avenues of inquiry I pursue.

I am however damned sure there is a shiteload of bad things going on in the world, which are for the most part instigated by a relatively small number of people with huge amounts of money; unfortunately, all too often, they are deeply involved with the governments of the world.

For example, don’t forget that Tony Blair is also mentioned with regard to Cliff Richard; apart from the obvious such as dodgy dossiers on weapons of Mass Destruction, he also has financial ties to Prince Andrew’s mate Jeffrey Epstein. Then of course there’s the question of Blair’s involvement with Margaret Hodge and Jack Straw, both of whom have questions to answer regarding abuse in Islington Care Homes and Children being trafficked to Jersey.

On top of that, we have Greville Janner and Paul Boateng, who has strong ties to the Lambeth abuse Scandal, which also has several ties to Islington and North Wales: Also worth noting Paul Boateng is a board member of Aegis Defence, which aside from profitting immensely from the invasions of Iraq and Afghanistan, is also under the directorship of one Prince Charles’ closest chums, Nicholas Soames:

Yep, that Nicholas Soames, who got a bit uppity about the Leon Brittan affair:

Here’s a picture of Jimmy Savile on Jersey: 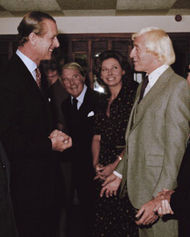 Anyhoo, wouldn’t want to be accused of going off topic:

Well I know what I meant but thanks anyway 🙂

who’s that old dear in the middle? she looks suspicious.

she’s one of our lizard overlords

scotroutes – Member
The whole Jimmy Saville thing did open my eyes to the scale of cover-up and willful ignorance that can go on. Someone on STW made allegations several years ago and I, amongst many others, called them out for making up stories. That has, inevitably, made me a bit more open-minded about similar accusations that, at the start, seem ridiculous and far-fetched.

I remember in Australia a mad woman who used to rant on about a high level paedophile conspiracy.

All of whom were claimed to be working in collusion to protect each other and suppress anyone who raised their head above the parapet.

Trouble was, she was right. It was massive, and just as she said. And just like here there were some very convenient deaths.

So now, I don’t automatically dismiss such claims, and I’ve learned to be suspicious of the motives of anyone who uses the tactics of scorn and suppression on those who raise those claims.

What happened there can happen here, and the information that’s piling up certainly suggests so.

Not seeing much information here to be honest – a lot of speculation, innuendo, guilt by association. Yes there are and have been paedos in public office and positions of fame but there have been lots of accusations about others – such as Leon Brittan which have been found to be total fabrications. Jimmy Saville seems never to have been called out in his lifetime, not because he was surrounded by paedos but that his accusers were not believed because of his fame, or it could have impacted on their careers. Likewise Cyril smith – it was not electorally advantageous for the Libs to out him.

I have to correct you there… not only was the rape investigation around which the whole smear campaign to swing public opinion and discredit Tom Watson found to be fully justified:

Inquiry decides Met was right to examine ‘far from fanciful’ allegations against late peer, but admits mistakes were made

but also, there were multiple allegations of child abuse from victims and Police Officers who were investigating organized networks of VIP abuse in the 80s


Perhaps the police investigations of the 1980s bear some relation to the files found shortly after Leon Brittan’s death:

Also worth bearing in mind the mention of Kincora in relation to the files discovered:

A SECRET document relating to Westminster child abuse allegations and marked for destruction surfaced the day after Sir Leon Brittan died, The National can reveal.

The file came to light in the Cabinet Office archives on January 22 this year – 24 hours after the former Home Secretary passed away.

Its contents continue to be withheld but a newly published letter said the document related to Sir William van Straubenzee, a late Tory minister, and referred to the Kincora Boys’ Home in Belfast – a notorious orphanage at the centre of abuse investigations.

Two other sets of papers – one which explicitly related to Brittan – also suddenly surfaced in the Cabinet Office in the weeks after he died.

Straubenzee, right, a former Northern Ireland minister, was a parliamentary colleague of Brittan, and both men, along with Margaret Thatcher aide Sir Peter Morrison and the diplomat Peter Hayman were named in the two files which emerged soon after Brittan’s death.

The question still remains as to why the Home Office felt it necessary to edit Fiona Woolf’s letters regarding her relationship with Leon Brittan, when the Home Secretary (who oversees the intelligence services and police, who are themselves implicated in the cover up) chose her as 2nd head of the inquiry. 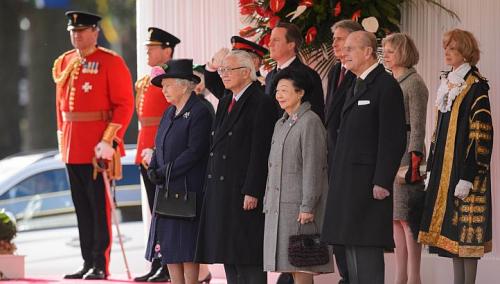 Photo taken on the morning of the day Woolf appeared before the Home Affairs Select Committee and chair Keith Vaz (who was involved in both Richmond (Elm Guest House, children sourced from Grafton Close childrens home) and Islington (Abuse in homes+Trafficking kids to Jersey) Councils, whilst large scale organized abuse was occuring in council managed properties)

Not forgetting the 1st head of the inquiry, Baroness Butler Sloss, had covered up abuse by a bishop…

The bishop in question was a close friend of Prince Charles: No fabrications were made in the writing of this post

Perhaps you should read the article in the Guardian before smearing everyone in sight.

Brittan died in January 2015, aged 75, not knowing that police had four months previously concluded he had no case to answer. His widow, Diana, was only informed in October 2015.

You really need to get out more – you continue to cast your nasty smears and innuendo against all and sundry. An allegation is not the same as truth or proof of wrongdoing. You really are a fruitcake.

On the plus side, I just ate some fruitcake, and it was darned tasty

SHit he is into cannibalism now 😉

I doubt it, he’s been dead for a while

The topic ‘Cliff!’ is closed to new replies.